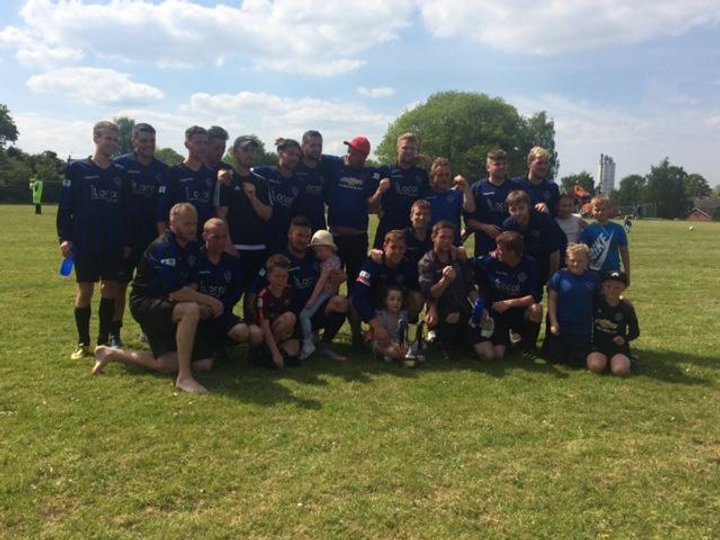 As our League bows out, take a look at our achievements.

The North East Wales Football League may have lasted just nine seasons but it has certainly produced some fantastic teams.

Many of the league’s championship winners have gone on to much bigger things, one of them even lifting the national FAW Trophy.

In 2011, the former Clwyd League split into two new leagues – the Clwyd East and the Vale of Clwyd and Conwy. 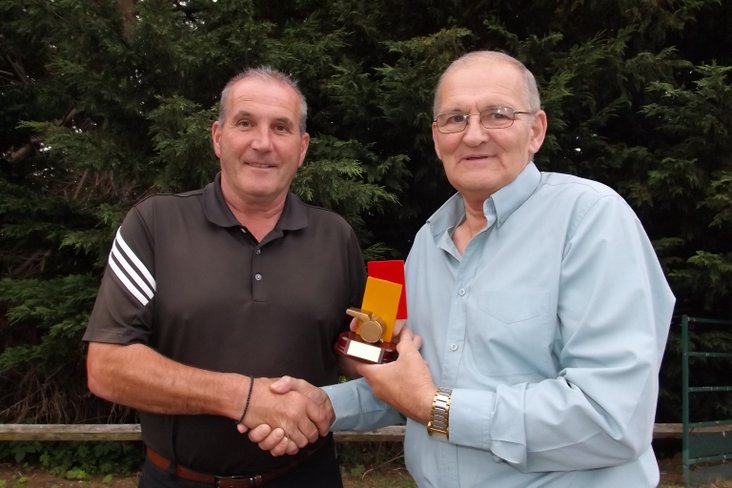 Referee of the year Ian Reid receives his award

The Clwyd East was to accommodate Flintshire-based clubs, which now became part of the North East Wales FA.

FC Nomads of Connah’s Quay had previously won the 2009/10 Clwyd League Division Two title with a perfect 20 straight wins and the following campaign saw them crowned Division One champions with 23 victories and a draw.

Nomads entered the Clwyd East having never lost a league game, and although they were eventually beaten twice in 2011/12 they still finished top of the table by nine points, making it three straight championships.

Promoted to the Welsh National League, Nomads were Division One runners-up in their debut season, but in 2013/14 they won the title with stunning stats of played 20, won 20, goals for 140 and goals against 11.

This should have led to elevation to the tier-two Huws Gray Alliance, but despite a determined fight by the club against facilities issues blocking their rise, they were denied promotion and runners-up Ruthin Town went up in their place.

FC Nomads sadly disbanded before the 2019-20 season, but the club still operates a Veterans team.

2012/13: CHAMPIONS – POINT OF AYR FC
Having been a competitive outfit for numerous seasons in the Clwyd League, the beginning of the 2010s were a golden period for Point of Ayr FC, who lifted the NWCFA Junior Cup for the first time in their history in 2010-11.

And the Colliers became an instant force in the Clwyd East.

The Ffynnongroew-based club finished runners-up in 2011-12 and followed up by lifting the title in 2012-13, losing just once in 20 matches and ending eight points ahead of second-place Aston Park Rangers.

Point were promoted to the Welsh National League (Wrexham Area) and in their first season took second spot in Division One behind champions FC Nomads.

The Flintshire side lasted three more full seasons in Division One before disbanding during the 2017-18 campaign.

They still run a Vets side.

FC Queen’s Park were a special team. Here they celebrate winning the 2013-14 Clwyd Cup
Martin Ford and Kevin White’s FC Queen’s Park side took the league by storm in 2013-14.

The Wrexham-based team, a separate entity to the previous Gap Queen’s Park which competed in the Cymru Alliance up to 2007-08, were unstoppable in their debut campaign.

The Park won the Clwyd East title by 15 points with a record of 19 wins and a draw, scoring 118 goals and conceding just 17.

Not only that, they won three domestic cups to make it four trophies in their first season of existence.

The Caia Park kings followed up by winning the Welsh National League Division One title and Cup the next season. Six trophies in two seasons.

After a third-place finish in their first campaign at WNL Premier level, they went on to be crowned champions in 2016-17, sealing promotion to the Cymru Alliance.

The Park struggled in the tier-two league, ending up relegated in their first season and returning to the Welsh National.

They finished top of the Premier in 2018-19, but lost the title after having points deducted for fielding an ineligible player.

The unstoppable Cefn Albion of 2014-15
No sooner had one new team blown away the opposition than another came along the following season in Cefn Albion.

With Nick Williams and Oliver Davies providing the bulk of the goals – more than 50 apiece – Albion won the title with a phenomenal record of: played 22 won 21 lost 1 goals scored 150 goals conceded 15.

Albion were also unstoppable in scooping the Premier Cup, Presidents Cup and the Horace Wynne Cup to make it a first-season quadruple – just like FC Queen’s Park..

Cefn were denied a five-trophy full house on the final night of the season when they were pipped 2-1 by Aston Park Rangers in the Clwyd Cup Final.

Albion’s only other loss in 37 games was away to Connah’s Quay Tigers in the league.

Albion went up to the Welsh National League and lifted the Division One title by a point from Llanuwchllyn.

They have been in the Premier Division for four seasons and came closest to winning the title this term, claiming the most points but finishing third behind champions Holywell Town and runners-up Rhostyllen on points-per-game.

In 2018/19. Albion added a massive double to their CV when they landed the WNL Premier Division Cup and the national FAW Trophy. Amazing club.

Rhostyllen made a big splash in the cups as well as the league
Rhostyllen became the third team in succession to win the North East Wales League title at the first attempt.

In a sensational debut effort, Rhostyllen won three other domestic trophies and enjoyed giant-killing runs in the Welsh Cup and FAW Trophy.

Rhostyllen maintained the trend of North East Wales champions doing well in the Welsh National League when they finished runners-up in Division One to Lex Glyndwr in 2016/17, securing promotion to the Premier.

After two seasons of adjustment in the top division, they went mightily close to the title this term, finishing narrow runners-up on PPG to Holywell Town.

Star of the show was Tom Douglas with 30 goals.

Sychdyn were very popular double winners
For once, it was not a newcomer which made the headlines in this season but an ‘older head’ in the shape of CPD Sychdyn.

Shaun Antrobus’ side overcame all the odds to land Sychdyn’s first silverware after a drought of 32 years, winning both the North East Wales League title and Premier Division Cup.

Sadly, the story was not to continue as due to not meeting the criteria for promotion to the Welsh National League, as well as an insufficient player commitment, the champions were forced to fold.

However, they made a welcome return this season after a two-year absence.

It’s a family affair for the 2017-18 champions
It was back to the familiar story of new sides having a whirlwind impact as Plas Madoc of Wrexham finished up champions by nine points.

Ryan Roberts’ side were all about goals – they scored 130 in 26 league games, winning 23 and losing three.

Nick Williams was in awesome form for the champions, bagging 10 goals in a single match and netting more than 50 in all competitions.

Plas did even better in 2018-19, roaring to the Welsh National League Division One title, going unbeaten in all 22 matches, winning 20 and drawing two, as well as amassing 106 goals.

They took the championship by a massive 19-point margin.

Madoc’s first season in the Premier did not go as well as they finished fifth bottom, but their introduction to senior football has been stunning.

Quadruple kings Flint Mountain
Success had always been thin on the ground for Flint Mountain, but the sleeping giant certainly awoke in 2018/19 as they picked up no less than four trophies.

Mountain were undefeated in the league all campaign, posting 18 wins and two draws, piling up 111 goals and letting in just 20.

They finished a comfortable eight points clear of runners-up Acton.

The Mountain were not finished there as they scooped the President’s Cup, Mike Beech Memorial Trophy and Horace Wynne Cup.

Like Cefn Albion and Queen’s Park in seasons gone by, the Flint side narrowly missed out on the elusive five-timer, losing to Acton in the Premier Cup final.

Jack Aitken, Lee Messham and Marc Gunther were among the leading marksmen for the quadruple-winners.

For the 2019-20 season, the club added an illustrious name to its title, becoming known as Halkyn and Flint Mountain.

They finished sixth in WNL Division One, showing signs that they can become a force at that level at times.

Latest champions Chirk Town
The worldwide coronavirus pandemic ensured the North East Wales – like every other league across the country – had its season cut short.

It was tight at the top, but in the end newcomers Chirk Town narrowly pipped Brymbo Victoria for the title on points-per-game.

Vics finished one point ahead of the Taverners, but Chirk edged it on P-P-G having played one match less.

It was a good final season for the league, the likes of Penyffordd Lions and Caerwys also contributing to a good battle for the title.

And the Veterans Divisions were also a great advert for the league.

Caerwys Vets were Premier champions, with Holt and Farndon finishing top of Division One.

The great Mike Beech
I cannot write a tribute to the departing North East Wales League without a few words about the man who did so much to make it a success.

Former league secretary Mike Beech will forever be remembered as a man totally dedicated to his sport.

He became secretary of the NEWL (then known as the Clwyd East League) on its formation in 2011 and his efficiency in the role was second to none.

Father-of-four and grandfather-of-15 Mike first began working in football when he joined Chester City as commercial manager in 2000 and was later club secretary before leaving the Blues in 2002.

He went on to serve a number of North Wales clubs including Conwy United, Cefn Druids, Flint Town United, Holywell Town and Queen’s Park in Wrexham.

His daughter Nicki worked alongside him at Chester while wife Carol washed the kits.

Fittingly, Carol and Nicki have taken on the running of the league and are doing a fantastic job.

Mike’s legacy as a giant of North Wales football administration is secure. A trophy bearing his name was introduced by the league last season.

No doubt he will be wishing the successor league well.

Born winner…..the legendary Martin Ford
The late Martin Ford was only part of the North East Wales League for one season – but what an impact he and his FC Queen’s Park team made.

In 2013-14, Martin and co-manager Kevin White led the Park to the NEWL (then the Clwyd East) title and three other trophies.

The club went on to reach the Cymru Alliance, lifting the Welsh National League Division One and Premier championships along the way.

When Martin passed away in 2018 at the age of 39, Wrexham area football lost one of its most inspirational figures.

I will always remember him as a passionate, successful football leader and a ruthless wind-up merchant who liked nothing better than a good banter battle.

Martin and long-term friend Kevin White took on the management of the team, and the pair had a remarkable first season together in the tier-five Clwyd East League.

Building a team of players largely from the Caia Park (formerly Queen’s Park) estate, they won the title in a canter, going unbeaten all season in 20 matches with 19 wins and a draw.

Park were promoted to the Welsh National League and in their debut season of 2014/15, scooped both the Division One championship and League Cup double.

Elevation to the Premier Division followed and the team finished third in 2015/16, also reaching the semi-finals of the national FAW Trophy.

More glory followed in 2016/17 as Queen’s won the Premier title by eight points, and also made it to the NEWFA Challenge Cup Final.

So much of this success was down to the influence of Martin Ford. He will never be forgotten.

As part of widespread changes to the Welsh football pyramid, the NEWFA has formed a new competition, also called the North East Wales League, which will consist of a Premier Division, Championship and a reserve league.

This will replace what has been up to now tiers 4 and 5 (the old Welsh National League Division One and the former North East Wales League respectively). WNL Premier joins tier 3.

The new NEWL structure will have an automatic promotion and relegation from tier 5 (Championship) to 4 (Premier Division – top two and bottom two) rather than the application process which operated with the old North East Wales League and WNL Division One.