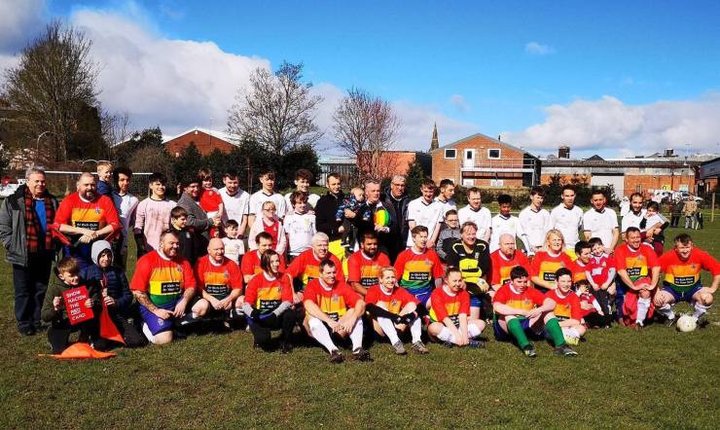 Bellevue retain cup – but football inclusion was the true winner on magic day. 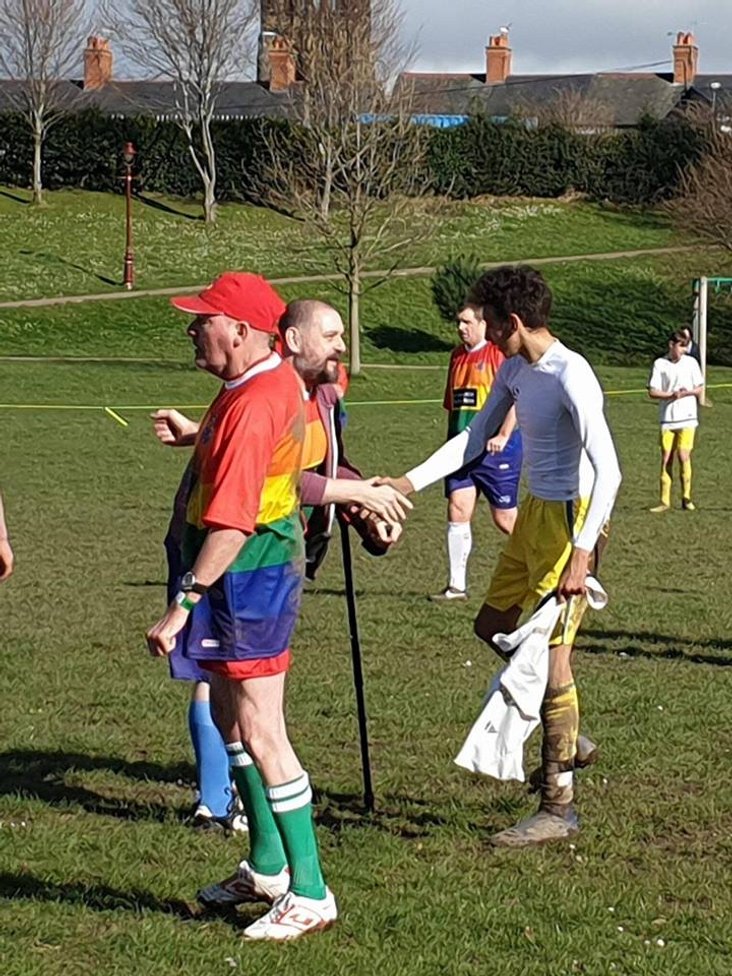 Bellevue FC retained their hold on a special trophy – but they had to battle hard to achieve it on a truly memorable day.

The second year of the Wrexham Community Cup saw North East Wales League side Bellevue take on a team billed as the Wrexham DSA All Stars.

The match was put on to raise awareness of important social issues, with representatives of several national organisations invited to support the event. 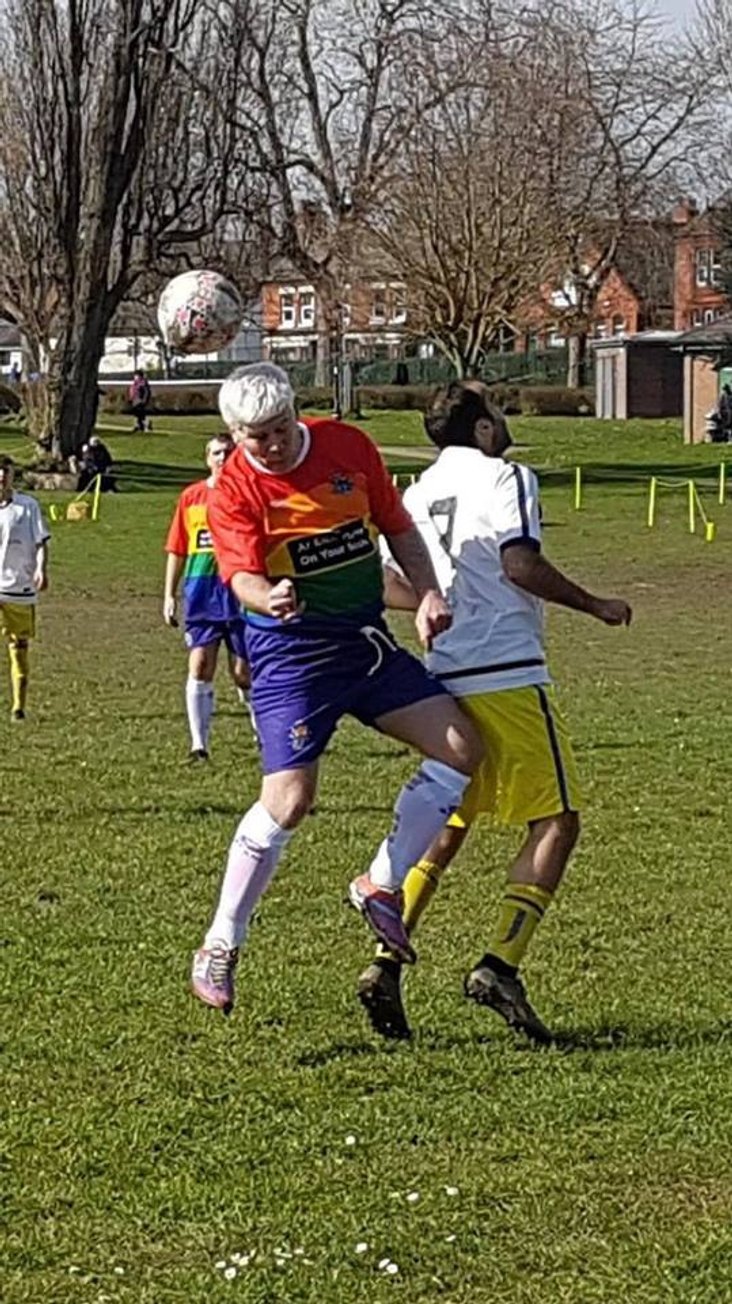 Kick-off took place at 1pm last Sunday following a minute of silence in light of the tragic events earlier in the week in New Zealand, at a very muddy Bellevue Park in Wrexham, with the home team having first kick and eager to stamp their authority on the match.

Despite the hosts’ enthusiasm, there’s no accounting for experience and it wasn’t long before Rich McNeil, son of Wrexham legend Dixie, broke through the Bellevue back-line and put some early pressure on 16-year-old keeper Jay Penny.

After the early chance the game became a bit scrappy as both teams tried to find a rhythm. Bellevue seemed to find their stride first as Bobby Gregory beat the long ball tactic to lay off at the feet of top scorer Joao Da Silva, who played through Tom Turnbull with only the keeper to beat. 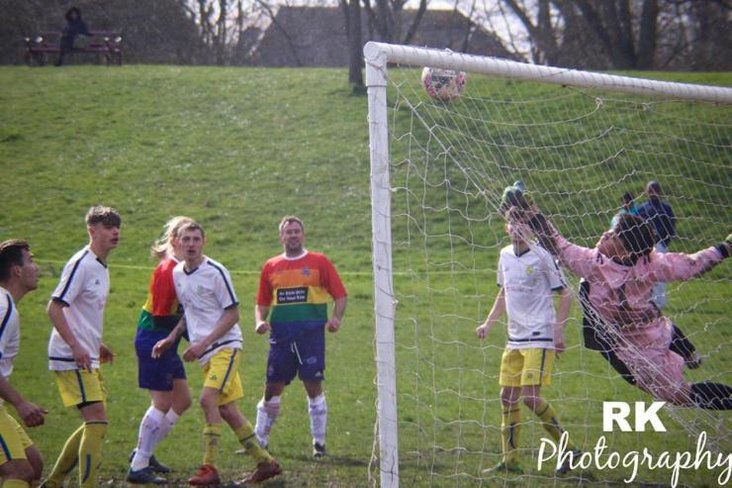 Stephen Lloyd was caught off his line as Turnbull chipped the ball into the net off his unfavoured left foot on the 10-minute mark.

Lexie Smith had chances to level for the All Stars with Penny making up for two dreadful mistakes in the Bellevue back line, but it was Rich McNeil who made the breakthrough for the visitors, with a strong run into the box and a fine finish past the teenage keeper who couldn’t keep it out with his fingertips.

With two goals in the first 20 minutes it looked like it was going to be a cracking match – and it didn’t disappoint.

Amongst a flurry of chances from both teams and some great saves from both keepers, Joao Da Silva sent Jordan Wright behind the defensive line down the right. Wright dispatched a fine strike beyond Lloyd to put Bellevue back ahead just four minutes after the equaliser.

With half time approaching, the All Stars pushed for a second goal and earned one moments before the whistle. Steven Humphreys was clumsy in the challenge for Bellevue and took his man down inside the box. All Stars manager Steve Gilbert made the choice to bring on Ian Parry to take the penalty.

Ian got out of his wheelchair and came onto the pitch on his crutches to take the spot-kick. Penny guessed the right way but couldn’t hold the shot as Lexie Smith followed up for a well deserved and overdue goal.

Half-time: 2-2
The All Stars started the second half by going for goal straight from the kick off.

The shot was true but Penny was awake to the danger and held the shot.

All Stars pushed hard though and young winger Rachael Nattrass was unlucky that a succession of incredible crosses weren’t converted.

Five minutes into the second half, Bellevue cleared a corner to Tiago Ginja, who sent Wright running.

The captain ran clear to score his second in the game and his fourth in two matches.

Bellevue then dominated possession for a spell and pegged the All Stars back.

Delwyn Derrick saw an audacious attempt to score direct from a corner turned behind by an alert Bryn Law, but on the second try, he hung a cross over the back post for Joao Da Silva to turn home on 68 minutes.

Three minutes later the All Stars replied with another break through the Bellevue back line from a Chris Leaney through ball. This time Penny couldn’t get anywhere near the shot and the All Stars looked to press on for the equaliser.

With around 10 minutes left, Bellevue put the game to bed, almost against the run of play.

All Stars were defending heroically and not giving Bellevue a hint of goal, but Joao Da Silva beat two players down the right to send in a delightful cross.

Bobby Gregory, Delwyn Derrick and Tom Turnbull all beat the defence into the box, but it was Turnbull who was closest to the ball and earned his second-ever goal for the club.

The final score was Bellevue FC 5 Wrexham DSA All Stars 3 but the real story was the message these clubs sent.

Bellevue are well established for their work towards inclusion in football, but the chance to line up alongside a mixed gender, mixed age, mixed ability team was a chance to show that football can truly be for everybody.

Moment of the day was Bellevue captain Jordan Wright and All Stars penalty-taker Ian Parry exchanging congratulations after the match in a demonstration of true inclusiveness.